We are deeply saddened to inform you our beloved teacher Dinh Dang Dinh has passed away on April 3, 2014.
A prominent Vietnamese human rights advocate and blogger, Dinh Dang Dinh who has specially campaigned for environmental rights has passed away on April 3, 2014 at the age of 50. He died of stomach cancer, time of death 9:35 pm at his home in Dak Nong province.Arrested in October 2011, he was sentenced to six years’ imprisonment in August 2012.

While serving his prison sentence in Phuoc prison, he was diagnosed with stomach cancer metastasized to his lymph nodes. Since January 2014, he has been treated in the Oncology Hospital of Saigon, but was kept under constant surveillance.

Dinh was a military officer who left the armed forces in 1988 after a disagreement about the ruling Communist Party’s policies. The authorities turned their sights on him after he launched a petition against a bauxite mining project in Dak Nong, in 2009. In his blogs, he advocated democracy and pluralism. He was convicted under article 88-1 (c) of the criminal code at the end of a three-hour trial in which he pleaded not guilty and defended himself because his family could not afford a lawyer. He was accused of writing and posting articles critical of the Communist Party, the government and Ho Chi Minh between late 2007 and October 2011, when he was arrested.

“The reprieve is meaningless,” he told Voice of America (VOA News service) about the clemency, “This injunction has no merit, there is nothing merciful about it since I have exhausted every last strength.”

On his deathbed, his last words, “If you care, please direct on the common goal, that is the fight against the dictatorship of the Communist regime. As for me, there is nothing left to be worried about.”

For his last wish, he received the Sacrament of Baptism to become a Catholic with a saint name Peter, a simple ceremony was performed by Father Thanh of the Congregatio Sanctissimi Redemptoris, CSsR. Peacefully, surrounded by family members, friends and the love of all human right activists around the world.

Teacher Dinh Danh Dinh has left a legacy of fighting for democracy and human rights for Vietnam and it will be carried on.

May he rest in peace.

WFHR & VFP with our deepest condolences. 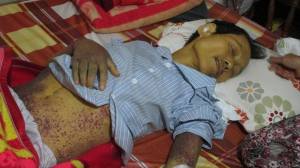